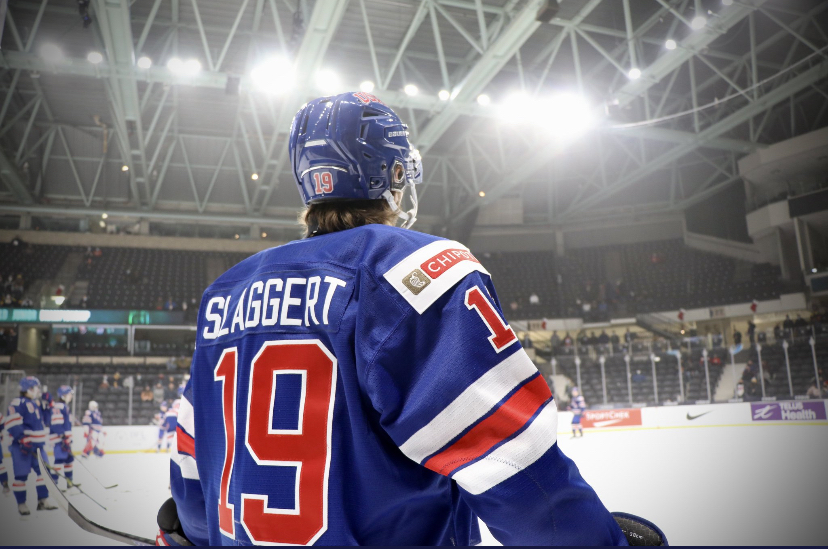 In their opening game in the IIHF World Juniors Tournament, the reigning champions Team USA came out hard against Team Slovakia to grab a 2-0 lead exiting the first.

Forward Matt Knies was the first to put Team USA on the board, taking the one-timer off of a feed from Logan Cooley that slipped behind Team SVK goaltender Simon Latkoczy. Just a couple minutes later, Mackie Samoskevich followed this up by shooting the puck in top corner putting Team USA up by two.

Team USA’s best period had to be the second where they dominated not just offensively, but defensively as well. Entering the period Team SVK led 9-8 on shots on goal. However, Team USA battled hard throughout to end the second 31-11. This also means that they only allowed Team SVK two shots on goal the entire period which also only occurred in the final few minutes for SVK. Additionally, they increased their lead further to 3-0 with a goal by Landon Slaggert. Slaggert, battling hard in front, grabbed the puck from in front of Latkoczy’s pads and shot it in behind him as Latkoczy was trying to locate it.

The game continued on with Team SVK coming back late into the third to make the score 3-2 which was still in favor of Team USA. It was due to a 4-on-3 power play opportunity for Team SVK that Martin Chromiak was able to find the back of the net the first time off of a quick one-timer. Sixteen minutes later, Chromiak found himself in another scoring position as he added another tally for Team SVK with just over two minutes left in the game. Despite this, Team USA held strong for the remainder of the game and finished off with a 3-2 win.

Notably, Team USA has some great players in their line-up. Looking at their first line with  Brett Berard, Matthew Beniers, and Matt Coronato, this is definitely a line that has the potential to produce a lot for them. Berard was seen multiple times breaking to the net and getting pucks out in front and Beniers was strong on the face-off for USA. Goaltender Drew Commesso was given player of the game for his contributions in net as he made 23 saves on 25 shots on goal.

Team SVK had strong players of their own with a big one being Latkoczy who faced 23 shots in the second period alone and only allowed one in. He finished the game at 39 saves on 42 shots. In addition, one of his best saves with his stop on Carter Mazur’s shot as he dove to prevent Mazur from slipping it in. This ultimately led to his team scoring their first goal and getting them on the boards about a minute later.

Other Scores Of The Night: