Scott Morrow Was A Key Player In Weekend Against Providence 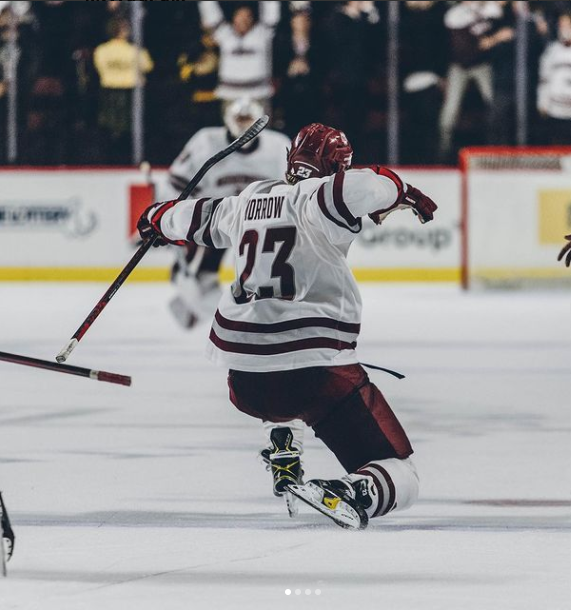 It is safe to say that sometimes when you watch a team, some players blend in with the speed of the game. This is not the case with Massachusetts defenseman Scott Morrow – and I mean this is a good way. Focusing on this weekend alone against Providence, he was a huge factor in their winning performances with scoring the only (and game winning) goal in Friday night’s matchup then gaining the fourth goal in Saturday’s game to run the score up even more for the Minutemen.

Morrow continues to throw up points and show his value to the team in each game that he plays in, really progressing as this season moves forward. He has netted three goals in the past three games alone and two assists along with them. Playing in his sixth regulation game against Merrimack College, it was there that he found the back of the net 1:59 into overtime to give Massachusetts their 5-4 win. This win secured Massachusetts at 2-0 in Hockey East and after the past weekend against Providence, pushed their record up even higher to 4-0 placing them at spot #2 in the standings.

Coming down along the outside in Saturday’s game, Morrow takes the wrist shot that goes right past Providence goaltender Jaxson Stauber which secured a three goal lead over the Friars as the score became 4-1.

Looking back at Friday night’s game, Morrow’s goal is definitely one to watch if you missed it. All alone in front, he received the pass from Cam Donaldson, took a step, and shot right over Stauber. This was so monumental in the game as it was scoreless up until then and it became the game winning goal as UMass held the Friars from netting any of their own giving UMass goaltender Matt Murray his 12th career shutout.

“I am a player who prides myselves on my offensive game so I am glad that it is translating to this level,” stated Morrow in his post game interview with UMass Athletics following the first matchup against Providence Friday night.

In that same interview Coach Greg Carvel stated, “we’ve had some good offensive-defensemen here and he’s going to be near the top. He is a tremendously gifted offensive player who he needed about four games to figure out what he can do at this level and you see he has tremendous confidence and his game without the puck is getting better too, so that’s a pretty good combination.”

It is safe to say that Morrow is just going to continuously grow as a player for the Minutemen and his impact is going to be needed against the tougher teams to come. UMass faces Boston University next who are 4-7 currently coming off of four straight losses. It’ll be exciting to see what Morrow can produce out of this next home-and-home matchup to help push the Minutemen toward their victories.