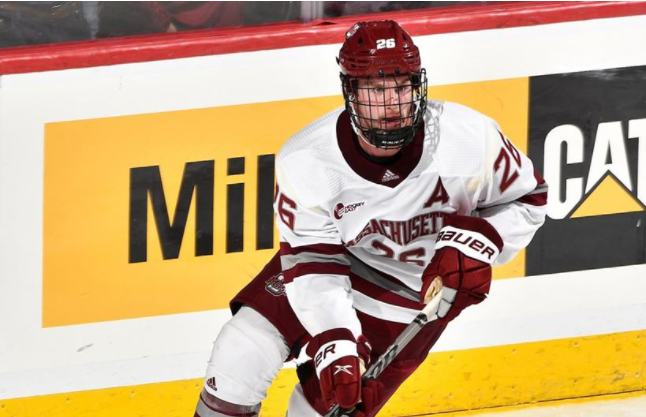 As the clock counted down, the Massachusetts Hockey team quickly faced overtime against the Merrimack Warriors. For the beginning portion of the matchup, UMass held a 1-0 lead. A big factor in this was goaltender Matt Murray and his stellar performance in net. The announcers were heard saying “this is his best save of the night” only to have to say it again a few minutes later because he made another insane save.

There was just about a minute left at the end of the second, the Minutemen were on a powerkill, and Merrimack’s Logan Drevitch got a hold of the puck to then take a backhanding shot towards the net. Murray sliding down to the ice, made a tremendous glove save to keep UMass in the lead.

However, the tides turned for the Minutemen at 4:14 into the third. Drevitch finally managed to get one in for the Warriors, tying the game at one. Now it was about battling hard for the rest of the game to get the lead back. With UMass’s record being 2-2 so far this season, this was the game that could either boost them in wins or loses. It is pretty safe to say that wins is what they were aiming for.

The rest of the third continued and the boys were battling hard to get that winning goal. UMass defense was tight, barely giving Merrimack an inch, especially towards the end. There was a point with just about eight minutes left that Merrimack had their best chance of generating something, but it fell flat as the period continued. In the closing seconds, UMass was in the Merrimack zone, they crowded the net as Anthony Del Gazio passed the puck over to Colin Felix on defense. Felix takes the shot into traffic with 4.7 seconds left on the clock and it goes in right before the horn can sound. If you were streaming the game, the camera panned over to the Merrimack crowd flooding the exit as Felix sealed the deal for UMass.

“I thought we came out ready to play and we found a way to win,” stated Head Coach Greg Carvel. Couldn’t agree more as captain Bobby Trivigno found his way onto the boards early into the game to establish the lead, then the Minutemen earned the win in the final few seconds to overcome the Merrimack Warriors for the first time this season.

Tonight there is going to be another matchup between the two teams, but this time at home for UMass. Being back in Mullins could play into their hand much better this time around; having the home ice advantage and the support of the crowd, it is possible for the Minutemen to be able to generate something early. Coming out right off the bat with an explosive first period, just like they did in the first game against American International College, will set them up for success against Merrimack. It was observed last night that UMass can hold a lead against them and prevent them much room from any scoring opportunities. Combine this with a hefty lead on UMass’s end and that pretty much secures it for the Minutemen.

It’ll be interesting to see how Merrimack responds to their home loss and how UMass tries to do it all over again for back-to-back wins against the Warriors in the Mullins Center tonight.