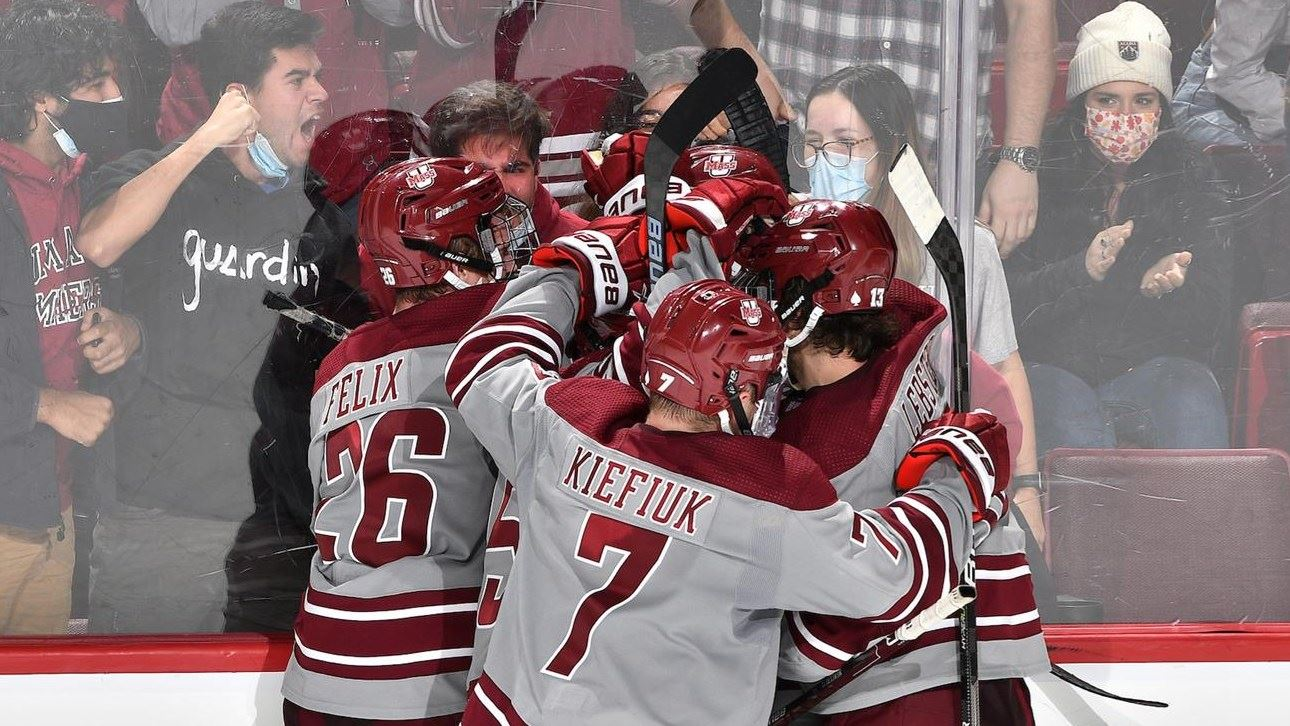 The UMass Hockey team needed to go into this weekend securing two wins in order to help boost them in the standings and to solidify their place as a top team in the nation. After falling back-to-back against Minnesota State, it was apparent that their style of play and determination to win was all the more focused against opponent American International College this weekend.

For starters, Lucas Mercuri looked more comfortable on the ice having a great physical and offensive presence. Multiple times throughout last night’s game he was able to take away the other team’s possession against the boards as well as, scored the all important tie breaking goal in the third; his first as a Minutemen. Positioned up top, sophomore defensemen Aaron Bohlinger passed the puck down to a waiting Mercuri. With the side of the net wide open for Mercuri he took the quick shot and put it in behind AIC goaltender Jake Kucharski for the game winning goal. Mercuri also recorded an assist on Ryan Sullivan’s goal in the first which gave UMass their 2-0 lead.

Between the games against Minnesota to what was observed facing AIC, it is apparent that Mercuri is finding his game and really stepping up throughout each matchup. Once the end of the season rolls around, he might just be one of the teams most recorded players and has the potential to really make an impact for the Minutemen out there on the ice.

Furthermore, the boys found themselves with a much slower start in last night’s game compared to Friday’s. They had no problem getting pucks to the net as they out shot their opponent 34-14. However, their difficulty was finishing on these opportunities and thus they found themselves in a tie game in the second and for much of the third.

Even when looking at Friday’s game, UMass came out hot in the first, but slowed down as the game progressed. Understandably, the other team is going to come back from the intermission ready to change their game play for a chance to fight back harder, but the Minutemen are going to need to find a way to carry their momentum throughout each period in future games. Luckily the season is still early and there will be plenty of opportunities for UMass to improve and get better. The team we see now can develop to be an even greater force than they already present themselves to be now (we are reigning champs for a reason).

Even Head Coach Greg Carvel states, “we’re a work in progress. We’re a long way from where we need to be, but we got two wins this weekend and to me that’s a character win.”

With the acknowledgement that there is growth to be had, it can be rest assured that the team is preparing more and more to battle back to the top rankings. They have the makings of being a top team no doubt. With strong defensive players such as Matthew Kessel and Colin Felix, skilled goaltending in Matthew Murray, and tough forwards such as Bobby Trivigno and Josh Lopina, they have the keys to success to dominate in their matchups. Once again, only time will tell, but I think we’re going to see a more developed and consistent hockey team moving further into the season.

The Minutemen will go on to face Dartmouth College October 23 at home in the Mullins Center. Dartmouth, who faced #14 in the nation Harvard, fell 4-0 last night. With UMass currently sitting at #9, it should be another good chance for the Minutemen to go out and grab a win.