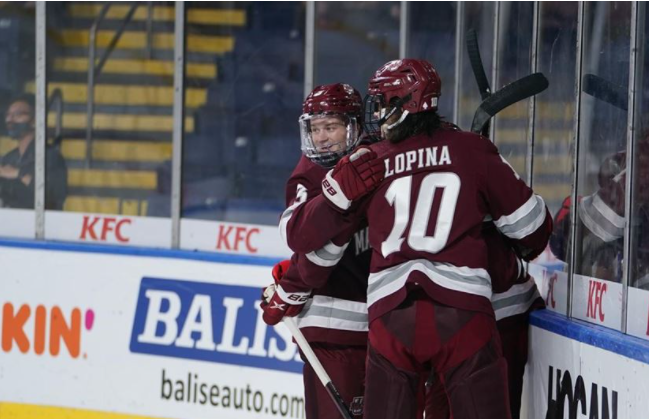 With the first two games of the season not going as planned for the University of Massachusetts Hockey team, they really found a way to turn the table in last night’s matchup against American International College. For starters, they wasted no time getting on board with Junior Forward Reed Lebster scoring fifty-three seconds into the game on the first power play. Following suit, Josh Lopina, another star forward for the Minutemen, scored a power play goal of his own to set the game at 2-0 in the beginning minutes of the first.

As a matter of fact, Massachusetts used both added offensive pressure and a stronger defensive presence in comparison to their first two games to score another three unanswered goals in the remainder of the game; two of which came out of the first as they headed into the second with a score of 4-0.

“Obviously you saw, to me, a more focused, desperate team,” states Head Coach of the UMass Hockey team Greg Carvel, “overall, I started to see things that I like, but we still have a long way to go.”

Another interesting tidbit from the game was the fact that after scoring their first two goals, they had only had three shots on net. Additionally, Colin Casey, a UMass Alumni, tweeted out the statistical record of Lebster’s contributions on ice and how this reflected in UMass wins. Why is this impressive? Well in every game that Lebster recorded a point, whether it be a goal or an assist, the UMass Hockey team went on to win said game. This occurred 15-0-0 throughout Lebster’s time as a Minutemen. Something that not many players can say for themselves without a doubt.

I am not saying that looking forward, if Lebster manages to get a point that we all start to claim victory, but if we let the stats do the talking, then I would feel safe betting for a UMass win. He’s a top forward, second liner, he’s going to continue to be a tough opponent for other teams the Minutemen face.

Speaking of tough opponents, Matt Murray continues to be a wall between the pipes for UMass. It was never questioned that he deserved his starting spot, but man does he prove it time and time again. AIC was not positioned too well offensively in the first, but battled some in the second. Even with the tough defense in front of Murray, there were times that pucks slipped through. He knocked them down well and kept the score secure for a large majority of the game.

The one that managed to go in for AIC was a tough save to try and make. Murray positioned over to the left post had to find a way to quickly recover to the other side as AIC forward Julius Janhonen waited ready to grab the loose puck and put it in behind him. There was a lack of defense on this side of the net as two players from both teams were coming back from a hit along the boards, so this didn’t give any aid to Murray trying to make the save. Overall however, much credit to his skills as a goaltender and his performance in last night’s game.

The Minutemen face AIC once again tonight at 7pm in the Mullins Center. With the way that they played last night, it could be expected that we see a first home game win for them. They might be missing Lebster in the line up due to a game misconduct being called on him for ‘charging the goaltender,’ but I have yet to hear what the final ruling is. Regardless, the Minutemen are sure to hold it down at home. They came into last night’s matchup ready to make an impact, which they surely accomplished. However this is only going to intensify with playing at home tonight. Between the home crowd cheering them on the whole way through, to wanting to defend the home ice, it is going to be another interesting game for the UMass Minutemen.