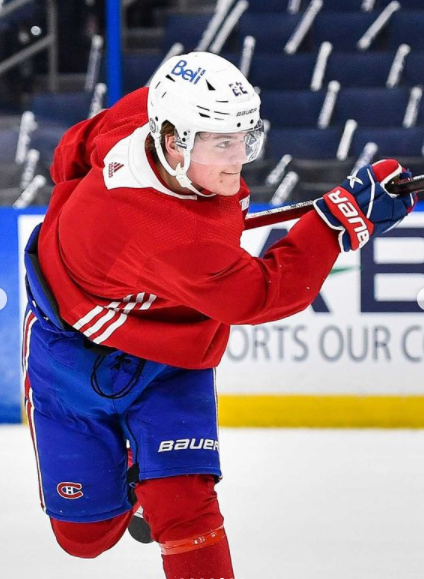 If you want to talk about great aspiring players in the NHL, look no further than Cole Caufield. There are many reasons why he has star potential and has already become a highly talked about player throughout the Hockey Community.

To begin, Caufield played his college career at the University of Wisconsin where he totaled two seasons with the Badgers. Between these two seasons he set his stats at 88 game points with 49 goals and 39 assists in only 67 games. In addition he racked up some impressive titles such as winning the Famous Hobey Baker award in 2021 and Top Men’s Player in NCAA Division I Ice Hockey. This was due to the fact he led the entire Men’s NCAA Ice Hockey in goals (30), points (52), powerplay goals (11), power play points (24), and shots on goal (165).

Quite an intensive list as he basically checked off every box in one swoop. I could see why Montreal decided to pull him up when they did as he would definitely be an asset to their offensive pressure, which he proved to be. However, right before his NHL career began, he competed in the IIHF World Juniors tournament with Team USA.

It is safe to say that the team performed exceptionally well as they earned the gold medal shutting out Team Canada 2-0 in the final round. Caufield himself earned five points, two goals and three assists, in seven games. Not to mention he wore an “A” on his jersey which is not surprising due to the fact the man throws points up on the board and creates tactical plays on the ice that poses a threat for any team he is on.

Caufield’s performance doesn’t stop there for the Wisconsin native. He signed a three year entry level contract with the Montreal Canadiens on March 28, 2021 who he was drafted by in 2019 as the 15th overall pick. Just about a month later he scored his first NHL goal in overtime to give the Canadiens their 3-2 win against the Ottawa Senators. Finishing off the regular season he totaled ten game points with four goals and one assist in ten games. However things got to be really exciting for Caufield come Stanley Cup Playoffs.

After coming back and beating Toronto to advance into the second round against Winnipeg, the Canadiens made a clean sweep of the Jets and found themselves in the semi-finals. Caufield shinned in game three of the series when he tied the game at one just 38 seconds after Vegas took the lead. Receiving the pass from Nick Suzuki, he had a breakaway towards the net, as he approached, he pulled the puck in closer to lift it up over the arm of Marc-Andre Fleury, hitting the top of the netting and in to put Montreal on the boards.

Cole Caufield throughout the playoffs, earned twenty game points with four goals and eight assists in the twenty-two games played. To reiterate, he is once again showing to be of value for Montreal’s offensive capabilities. His stats do a lot of the talking for how good of a player he is and due to the fact that he was only a rookie in this concluded season, I would expect a build upon what we saw moving into the next. This is especially because Caufield will be able to play in the full regular season with the Canadiens, giving him more experience and time to get used to the NHL style of play and really breakout as a player. In conclusion, he has no shortage of successes so far and therefore, it will be really exciting to see how he progresses moving forward for the Montreal Canadiens.