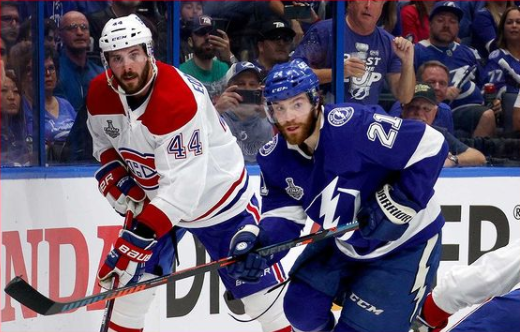 If Tampa Bay was looking to make a statement in the final round of the Stanley Cup Playoffs, well then they accomplished that in the opening game. With a concluding score of 5-1, the Bolts secured their first win of the series and took the lead heading into game two.

The Bolts had the makings of a dominant team throughout the whole sixty minutes. First of all, their defense was spot on for a large majority of the game. They were able to push out the Canadiens from coming down center ice when entering the offensive zone on many occasions which then inhibited chances on net for Montreal. They then paired this with their ability to block shots and make key takeaways to just prevent the Canadiens from any more room on the ice. The Bolts then followed this up with a strong offensive presence to really hit the nail on the head throughout the entire game.

Montreal was able to bag a single goal in the second with a shot from Ben Chiarot off of a double deflection in front of Andrei Vasilevskiy. Definitely a tough goal for any goaltender to stop and it proved to be as the puck slid in and decreased the Bolt’s lead to 2-1 heading into the third. However, the momentum from this goal did not catch up to them in the final period of the game and Montreal found themselves at an even greater disadvantage.

Tampa Bay just flourished in the third. They had scored three unanswered goals including one from Steven Stamkos on the powerplay. That is a huge feat in itself as coming into the game, Montreal had been on a streak of thirteen straight games with no power play goal scored on them.

“I thought for that second period, not counting the last five minutes, that we had a really great period,” said Steven Stamkos in his interview with NHL Networks, “we let them get back into the game a little bit, let one in. We just talked, we had a one goal lead heading into the third period just like we did in game seven the other night, let’s attack, let’s go and keep the pressure on.”

Come game two the Montreal Canadiens need to strengthen their offense, including their powerplay, and especially their defense. Carey Price really held it down for them between the posts and without him, that score could have been a lot worse. He came out with some huge saves throughout the night with one being a glove save on Stamkos who was wide open on the wing. Another being a pad save on Tyler Johnson’s backhand shot right in front of the net.

Offensively the Canadiens had some chances in front, but were unsuccessful at converting on many of them. Additionally, they had two powerplay chances that could have been useful to them earlier on in the game as well as in the third. If they can improve on these aspects and shut down Tampa’s game, then they can have a chance of coming back and tying the series. If not, I would expect Tampa to take the next one as well.