Minutemen Find Themselves In a Shootout Once Again 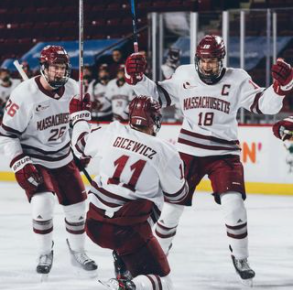 Last Friday in the matchup between the Maine Black Bears and the UMass Minutemen, it is safe to say that the first period was all UMass. This is due to the fact that they quickly managed to grab a two-goal lead starting with a tying goal by Carson Gicewicz and had outshot Maine 13-7. Coming in as a senior transfer from St. Lawrence, Gicewicz was a new face for the UMass crowd and no one knew what to really expect. Throughout the season, he has proven to be a valuable addition to the roster, as he finished the regular season with a combined 19 points off of 13 goals and six assists. The thirteenth goal for #11 pushed UMass into a tie against the University of Maine which then led to three unanswered goals by the Minutemen in the first period.

However, in the second period the Minutemen found themselves to be more challenged by the Blackbears and only managed eight shots on goal in the twenty-minute time frame. Eduards Tralmaks was a force for Maine as he allowed little to no room and got in the way of countless shots by the Minutemen. Although the regular season is over, if there were any chance that the Boys in Maroon had to face them again, they should make it a  priority to shut him down, allowing him no room to interfere with the play. If UMass had done this throughout the game, it may have inhibited his ability in scoring the third and tying goal for Maine, which put the game into OT.

UMass impressed by killing off the penalty by Aaron Bohlinger in OT, which allowed them to extend the game to a shootout. Although the chances were there for UMass, they just couldn’t find the back of the net. The only one to do so later in the game for UMass was during the shootout by Zac Jones. Jones went third for the Minutemen and approached the net carefully. With great puck movement, he got Maine goaltender Victor Ostman to drop quickly, allowing him to convert the puck to his puck backhand and lift it up into the net. Having scored the game-winning OT goal against Providence Jan. 23, it is safe to say that Jones is a go-to player for such situations.

Despite this, Maine proved to be the greater goal scorer of the two teams as Lynden Breen put the first shot in for Maine in the first round. Another round went by with nothing from either team until Jones tied it 1-1. But Donavan Houle didn’t let that tie last long as he followed up with another goal in Maine’s favor. Unfortunately for UMass, Garrett Wait could not do the same, and Maine came out with the OT win.

Heading  into the start of Hockey East Playoffs against Northeastern on March 14, the Minutemen need to come out strong as they did against Maine and extend this effort through every period. This game is crucial to win as since every team has qualified, the rules have changed to one loss and your team is eliminated. The Minutemen are very much capable of winning, and it once again comes down to stopping Northeastern’s key players, getting pucks in deep, and crashing the net. This season the Minutemen faced the Huskies twice coming out of both with two wins. Several players recorded multiple points in the back-to-back games for UMass, which could reflect on who we’ll see on the ice come Sunday. I can see Gicewicz and Wait getting some points on the board, as well as some assists for Oliver Chau and Matt Kessel. I’d also predict to see Filip Lindberg in net as he has been on a roll the past two months having been named the back-to-back Goaltender of the Month by Hockey East. With that being said, Matt Murray is still a contender to see between the posts as he played most of the beginning of the season and recorded a record of 9-4 in such games. He also has had experience against Northeastern this season, which might give him an advantage over Lindberg if it came down to it. To see another head to head battle against the UMass Minutemen and the Northeastern Huskies watch Sunday March 14 at 4pm.